I experienced a situation yesterday that I can’t seem to get out of my mind.

I won’t get into lots of details, but I witnessed a parent at a soccer game yesterday ranting and raving about how the other team was “stacked” with older kids as her child’s team was being scored against.  She continued and continued to complain outloud.  Everyone around her could hear her words.  I was sitting a ways behind her in my lawn chair.  I tried to drown her out by cheering positively for the same team her child was on.  I tried to say the good things that were happening and voice how the kids were playing well.  (I wasn’t familiar with this team…only with the relatives of mine on the team.)  Keep in mind, these kids were between 5th and 8th grade.

It got to the point that Ali and Zach were looking at me, and I was looking at them…in disbelief that this parent was saying the things she was saying…against the woman who put the teams together, against the other team and even against her own child’s teammates. Within a matter of minutes, I knew I needed to get up and move away….so I did.  I saw another relative of mine and went to talk to him.  Within just a few minutes, Ali and Zach had joined me.  Ali asked me, “Mom, can I say something to that lady?”  Calming her down, I said something like, “No, it’s not our place to.  Let’s stay out of it.”  (She has some of her Mom in her! I knew if either one of us said anything, it wouldn’t be good and it would blow into something that wouldn’t glorify God…even though my flesh really wanted to step in and say something!)  I sent up a silent prayer, “God, soften that lady’s heart.”

God showed me at least two things through this situation.  1) Acting like that and saying the things this mom was saying in no way glorifies Him, and in no way helps anyone.  Her behavior and words affected others around her, and as she complained more and more, other parents began to do the same.  I wonder how the kids felt hearing her yell at them like she was.  My heart broke for them.  This was not a good example of good sportsmanship by any means.

2) Ali has been hurt most of this volleyball season to this point–her Senior season–her last season.  She hasn’t been able to play.  Would this mom’s attitude have been different if she would have thought about the many kids who can’t run and play because of one reason or another?  What if she was just thankful that her child was healthy enough to play?  I know I can get caught up in the competitiveness of games that my kids are playing in.  But, I won’t complain that my daughter isn’t playing as much as I would like, or that the other team is “stacked.”  I’m just thankful her hips/back seems to be getting better and that she was healthy enough to play at last Tuesday’s game!  What a different perspective!

I’m trying very hard not to judge this mom.  She may have other things she’s dealing with.  I’m thankful that God has taught our family to behave differently.  To be encouraging instead of defeating.  To say kind words to uplift and not words to tear down.  I guess the saying my mom used to say is coming back to me, “If you can’t say something nice, don’t say anything at all.”  Thanks, Mom. 🙂

Our words can be poison or fruit.  Which will we choose today? 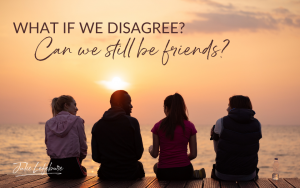