I forgot how special Mission of Hope’s Saturday night Worship Services are. Our family usually attends Sunday morning’s Worship Service. I have written before about how I am continually awed and amazed at what God does and what transpires during the Sunday services. I almost ALWAYS leave church with a new thought about God, or about His will for my life, or with a bigger picture of what our time on this earth is really all about. It is indescrible sometimes!

Last night our family attended the Mission’s Saturday night Worship Service. Pastor Barb facilitated the service. Pastor Brad Gillis gave the message and the band, Refiner’s Fire lead worship music. Pastor Brad delivered a sermon that was encouraging, uplifting, convicting and life-changing. He based his sermon on two scriptures in Proverbs: 11:14 and 13:20.
11:14 says, “Without good direction, people lose their way; the more wise counsel you follow, the better your chances.” (The Message translation)
13:20 says, “Become wise by walking with the wise; hang out with fools and watch your life fall to pieces.” (The Message)
Brad said something that I’ve learned before but have forgotten…”The person we become five years from now is based strongly on the books we read and the people we associate with.”
He then gave some traits on what we should look for in our friendships. Things like being loyal, being creative, a person who shares your vision, wise and intelligent, a person who complements you, a person of faith, a person of integrity. We should also strive to be that kind of friend to others. It was a great message for all of us…for our children and for us as adults.
There was a time during the service that people could go up to the altar and just spend time on their knees in prayer. I went up. As I was kneeling and praying, I stopped for a minute to glance and see who was next to me. Tears filled my eyes as I saw who was on each side and was again reminded of why Mission of Hope exists…my Pastor was to my right, and a homeless man was to my left. I was flooded with emotion…where else could I be on my knees next to the woman who is my spiritual mentor, and next to a man who needs the hope I have in Jesus Christ? Where else could I be worshipping in such a mixed crowd of people…the rich and the poor? Where else could I be talking to Jesus, being reminded of who He spent much of his time with while he was on this earth…the needy, the forgotten, the lost, the poor, the sick, the lonely, the homeless? I knew I was exactly where I needed to be.
But the thing that struck me the most from the entire service happened during the offering. Bill helped collect the offering and prayed over it at the end of the service. After the service was over, Pastor Barb asked if I would help her count the offering. As we were in the office counting, Pastor Barb said, “Wasn’t that such a sweet service? I love Saturday night Worship Services…they are so sweet.” Sweet…that exactly describes last night’s service! But as we were counting, two bus tickets were on the bottom of the 0ffering basket. Two bus tickets. Barb said that one man gave the only thing he had…two bus tickets. He had no money, but he had two city bus tickets. (City bus tickets are in high demand at the Mission, and are a luxury to many of the Mission patrons.) My heart was touched and again, tears filled my eyes. It reminded me of the story in the Bible about the widow…
Mark 12:41-44: “Sitting across from the offering box, he [Jesus] was observing how the crowd tossed money in for the collection. Many of the rich were making large contributions. One poor widow came up and put in two small coins—a measly two cents. Jesus called his disciples over and said, “The truth is that this poor widow gave more to the collection than all the others put together. All the others gave what they’ll never miss; she gave extravagantly what she couldn’t afford—she gave her all.”
Some man gave his all by giving those two bus tickets. That act of unselfishness and giving by that man left such an impression on me…I’m unable to forget it still this morning. Would I be willing to give all that I had, even if it were my last two bus tickets? Would we all be willing to do that? 🙂
◀Previous Post
Next Post▶ 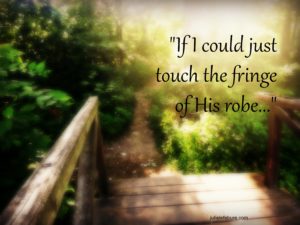 What If We Had Enough Faith To Touch The Fringe?

END_OF_DOCUMENT_TOKEN_TO_BE_REPLACED 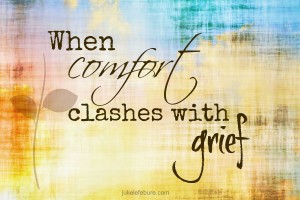 When Comfort Clashes With Grief