Discipline is doing what needs to be done, even when you don’t want to do it.

Am I the only one who knows what I need to do, but sometimes just don’t want to do it? Call it procrastination or putting things off or “I’ll just do it later.” Especially when it comes to something that’s not urgent. Or something that’s unpleasant. I can delay that thing I need to do until it gets to the point that I absolutely have to do it. When there’s no other option but to just do it.

Take my # 30 tooth, for example (named by my dentist). It started bothering me a few weeks ago, but since we were in a pandemic, I chose to ignore it. I tried to do what I call “limp it along.” How does one limp along a tooth, anyway? If you have the answer, let me know. Because what I did, didn’t work.

Last Friday that tooth became so sensitive, I knew it was angry with me for attempting to “limp it along.” My dentist fit me in the following morning. After his examination, he said the words I didn’t want to hear, “You need a root canal.” Seriously?? As silly as it may read, I wanted to be like Jonah in the Bible and run. To run in the opposite direction of my so-called Nineveh, a root canal. I’ve had one before and I didn’t care to ever experience that again. No thank you. But, read farther in Jonah’s story and we see what happened to Jonah. He was swallowed by a big fish, then eventually relented and ended up going to Nineveh anyway.

I didn’t want to do what I knew I needed to do.

I didn’t want to be like Jonah. Well, a part of me did. The running-away part, not the being-swallowed-by-a-big-fish part. But, running away from a root canal wasn’t the answer, no matter how much I wanted to follow that desire.

My tooth wasn’t going to get better on its own. I tried that. I needed to get this taken care of. So, Monday morning I made the call to schedule my root canal with a local endodontist. (That title even sounds awful, doesn’t it? No offense to the endodontists out there.) As I thought of the reality of getting root canal during a pandemic, my nervers were a bundled up mess. But, I had a next step with an appointment set. And that took the pressure off. But, still, I didn’t want to do it.

Sometimes putting something off we know we need to do is worse than just forging ahead and actually doing it. Right? The mountain I can make out of doing that thing becomes bigger than just tackling it. I can waste much time and energy fretting, dragging my feet, delaying that thing, that it becomes daunting and draining. But, once it’s done, once it’s behind me, I wonder why I didn’t get it taken care of sooner.

What’s that thing you don’t want to do but you know you need to do?

May I suggest just doing it? Sure, easier said than done. But, having that thing behind us feels amazing! Sometimes thinking about the end prompts us to take action in the beginning.

So, this morning I had my root canal. It wasn’t fun, but it wasn’t as awful as I remembered it to be. Even driving there, I didn’t want to go through with it. But, I prayed God would give me the courage. And, He did. The Novocaine has now worn off here at home, and my mouth finally feels back to its normal size. It’s tender and a little sore, but it’s behind me. I’m glad I’m not having to “limp it along” anymore.

We can do what we need to do in His strength.

A verse I quote to myself often fits in situations like these… when we don’t want to do what we need to do:

I can do all things through Christ who strengthens me. 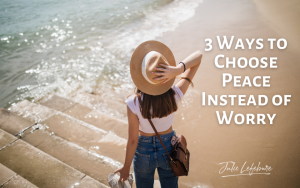 3 Ways To Choose Peace Instead Of Worry

END_OF_DOCUMENT_TOKEN_TO_BE_REPLACED 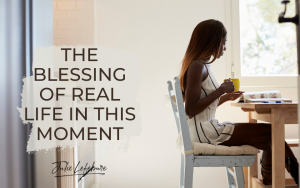 The Blessing Of Real Life In This Moment

END_OF_DOCUMENT_TOKEN_TO_BE_REPLACED 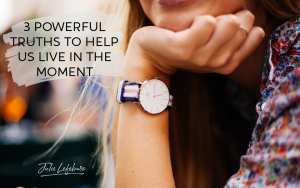 3 Powerful Truths To Help Us Live In The Moment