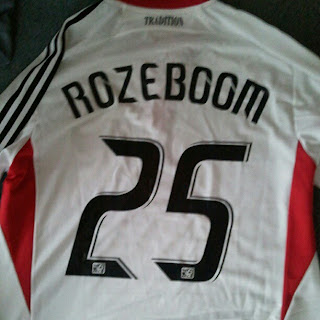 …a jersey from Lance Rozeboom, a player and new friend from the pro-soccer team D.C. United!

I wish you could have seen Zach’s face when he opened it. It was a face that I’m not sure I had ever seen before. His smile was priceless, and his eyes were a little “misty.” (I won’t embarrass him by saying he had tears in his eyes, but it was pretty close to that!)

Zach has followed Lance ever since we were tipped off by his mom that he was in the running to make the D.C. United team. Lance was injured in the spring, and we have been praying for Lance’s healing. He played 70 minutes in a reserve game last weekend, and is on his way back to health! We are excited for him!

Zach texted Lance to thank him and it’s been encouraging to see how Lance has reached out to Zach. I pray we get to see Lance play in person some day soon!

In the meantime, we are praying for Lance’s safety out in the D.C. area with approaching Hurricane Sandy (and praying for my friend Patty, her family and all others in the path of this terrible storm).

Lance sure knew how to make Zach’s week last week a memorable one! Go D.C. United! 🙂