Zach (sometimes called Z-Man) had his last 7th grade band concert for the year last night.  It’s hard to believe how quickly the school year is coming to an end!  His 7th grade band is so talented, and I believe I heard someone say last night that there are 137 7th graders who make up the 7th grade band!  I laughed to myself in thinking I didn’t have that many students in my high school, let alone in band! 🙂 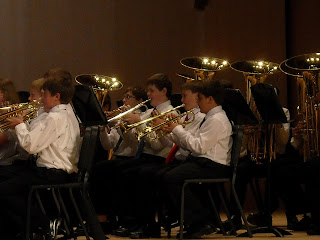 Zach is the 2nd from the end (wearing red tie) 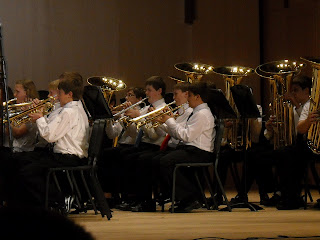 Zach plays the trumpet.  He likes learning new music, and performing in concerts, but doesn’t care so much for practicing and going to his lessons.  They are registering for 8th grade band today, and even though part of him doesn’t want to play in 8th grade, part of him does.  I’m assuming he’ll be signing up, but we’ve left that decision up to him.  So…I guess we’ll see. 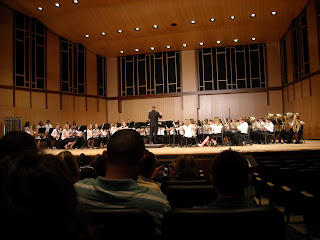 I’m thanking God today for all of the many talents God has given him…including playing the trumpet.  I told Zach last night how very proud of him I am/was when I was tucking him into bed.  He responded, “Did you see me mess up tonight?”  I said, “No…I just heard beautiful music, and some of that beautiful music came from YOU!”  I’m thinking this morning…imagine how beautiful that music must sound to God, especially when it’s used to thank and praise Him! 🙂 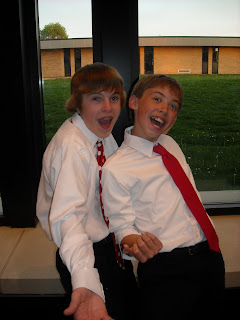 Zach and his cousin Justin…two peas in a pod! 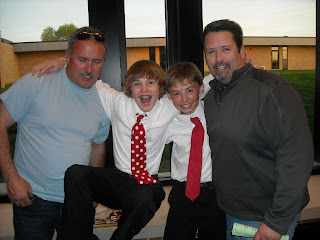 The boys and their dads
(Mike and Bill area brothers…can you tell?  Their eyes are closed!)  🙂
◀Previous Post
Next Post▶