Up For Almost 24 Hours 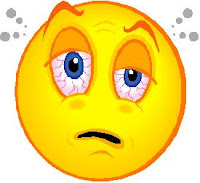 I find when I say “I’m tired,” it makes me feel even more tired.

So I won’t say that this evening…even though I am.

I was up from 5am yesterday morning until 4:30am this morning. I’m not used to that kind of sleep pattern. My husband may be, but I’m not.

From 11pm until 4am, we were in the ER once again with Ali. She was sick all day yesterday. And seemed to get worse as the day went on. Once her eyes started rolling back in her head last night, I drew the line in the sand and we took her in.

She mentioned a couple times yesterday and once last night that she felt her head hurt because of how she was getting hit in the head with inflatable rafts the day before in a pool during a water fight. I didn’t put two and two together last night, realizing she may have a concussion.

I knew it was going to be a long ordeal last night when we arrived at the hospital and they put us in an “overflow” room…which was ice cold. I’m glad we wore pants (it was 80 degrees out at 10:30) and brought sweatshirts. The ER was packed.

Our doctor finally came in, and we were pleased that he was our cousin. After getting all necessary information about her symptoms, he wanted to run a couple tests to be sure this wasn’t meningitis. “Oh, Lord, please no.” Were my first thoughts.

Ali was in so much pain. I never like to see my children or anyone else for that matter in that kind of pain. They gave her i.v. fluids, a pain killer and anti-nausea medicine. The tests came back an hour later, but they were still not ruling out meningitis. To be sure, he suggested doing a spinal tap.

My mind raced to everything I’ve ever heard about spinal taps…and all were negative. After sharing my concerns with him and Bill, he reassured me that if this was meningitis, and we didn’t do the tap, it could be life threatening because it would go untreated.

Ali did so well through it. I was so proud of her. Tears seemed permanent in my eyes during the entire procedure. All of us were glad when it was done. He showed us the spinal fluid which was clear…that’s a good thing.

Close to two hours passed. Bill and I tried to sleep on the hard, uncomfortable chairs. Ali slept soundly with the pain meds running through her body. It was welcomed news when he came back in and said the test came back negative. Praise God! No meningitis!

With the other symptoms, he concluded that she has mild head trauma. He prescribed a pain medication and anti-nausea medicine for the next few days. We were released and were glad to get home.

I slept for three hours. Bill took Zach to driver education, and went back to bed and slept an hour and a half more. Ali slept until around 11am, and much of the day. She seems a whole lot better than yesterday, and I’m so glad her painful headache has not returned.

I went to the Mission only for a couple of hours today. I felt sick and weary, and came home early to rest and to be with Ali. I plan to go to bed extra early tonight. It’ll be a full week ahead of us.

I’m praying God protects Ali from any complications from the spinal tap, and for full healing of her body. She’s been through so much these last nine months. God must really be preparing her for something great!

I’m ready for life to slow down just a bit. I’m ready for our summer to “officially” begin. But right now, most of all, I’m ready for all of us to be healthy and stay healthy. Especially Ali.

We certainly would appreciate your prayers!