The Start of Summer

This was our first week of summer break.

Last Friday was Ali’s and Zach’s last day of school for the 2010-2011 year.  That night Zach and his school’s men’s choir, A Few Good Men, performed at the Harmony Hawks concert at Theatre Cedar Rapids.  It was a wonderful concert and Zach’s group did very well!  I was so proud of them!  It was fun to also see our friend Dick who sings in Harmony Hawks! 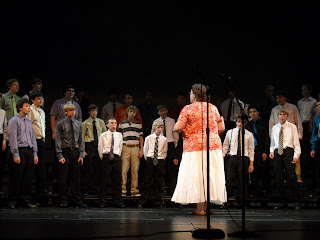 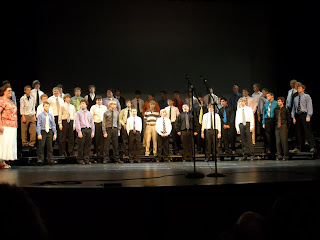 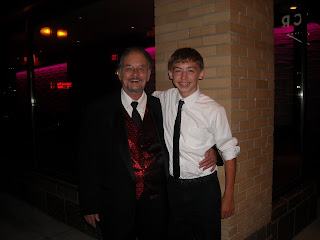 Saturday and Sunday were busy with graduation parties, shopping for clothes for Ali’s new job, Ali starting her new job, church and some downtime.
On Monday, activities for Ali and Zach began at school for off-season volleyball and cross country.  Ali worked each day, Zach had soccer practice two afternoons, I kept at my current schedule at Mission of Hope, and Bill continued with his normal work schedule.  (I thought summer was supposed to be more relaxed!?!?)  Tuesday it was over 95 degrees out, and at the Mission we were caught off guard a little with having the air conditioning on ahead of time.  Since less than half of the building has air, the air conditioned part never dropped below 80 degrees.  It was miserably hot…especially in the part of the building that had no air. I had sweat dripping off me most of the day! (Yep…it was pretty attractive!)  I can’t wait until God moves us into a building of our own!

Thursday Ali called me at the Mission to let me know two friends of hers were in a single car accident early that morning.  One of them was pronounced dead at the scene, the other was in the hospital.  This is the second time in two years I’ve gotten a phone call from her saying that a friend of hers passed away.  Her world was rocked, once again, and so was mine.  All the petty things that I thought mattered up until that point, flew out the window.  All I wanted to do was to hold my children at that very moment.  I couldn’t imagine what boy’s parents were going through, struggling with his death.  And I still can’t.  I have thought of them so often in the last two days, and am praying for God’s comfort, strength and love.

Yesterday I worked from home and wrote my message for our Worship Service tomorrow at the Mission.    It’s pretty amazing how God showed me what I was supposed to talk about.  After my prayer time, and asking God specifically to show me what He wanted me to share on Sunday, I opened up my facebook page on my phone.  I thought to myself, “I should be writing my message, not being on facebook.”  But I thought I would just catch up there a little and then get to my message.  I saw a post from Ali that stopped me and brought me to tears.  Her post is the title of my message for tomorrow.  (She doesn’t know that yet, though.)

And the scripture I’m using is also God-appointed.  Thursday after sharing with my friend Marcia, who is also the supervisor at Mission of Hope’s Shelter, that I had no idea what my message was going to be about on Sunday, she said to me, “I don’t know why, but I keep getting that you should look in 1 Corinthians for your message.”  After looking up scriptures to support Ali’s post, I found the perfect one in…you guessed it, 1 Corinthians unintentionally! 🙂  I love it when God does this kind of stuff!

I worked on my message from 7:15am – 4:30pm yesterday, with a few breaks in between.  I put the final touches on it this morning.

Today it feels good to be home.  I’m getting caught up on things I need to here, and I hope to begin another project for the Mission this afternoon.  Ali works again this afternoon.  Zach is at his cousin’s.  Bill is sleeping, as he worked last night.

Will summer slow down for us?  If this past week is any indication, I’m guessing it won’t.  But I love summer…grilling out, bonfires, ball games, warmer weather (not 95 degrees though), waterparks, vacations, etc.  I’m looking forward to a great summer!