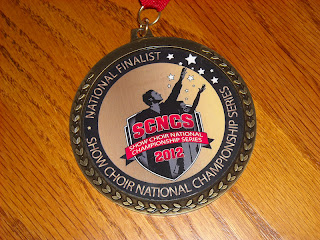 For the last 24 hours, my buttons have been bursting with pride for Ali and our high school’s show choir that she’s a part of!

At the end of January, they were invited to participate in the Show Choir National Championship Series which was held yesterday in Waukegan, IL.  This was something no one really expected, but what an honor to be invited!  The students and parents committed to participate, even though it was added cost for each one.

I have to stop here and share my side of this story with you…please bear with me.  Once I found out when the competition was going to be, I realized that it was the same weekend of my BSF Leaders’ Retreat in Milwaukee.  My heart sank, and I first thought I wouldn’t be able to attend this…Ali’s last competition of her high school career.  But then I mapped it and was pleasantly surprised that it was only 1 hour and 7 minutes from Milwaukee…I could go!  I cleared it with my BSF “superiors”.  I was already planning on driving to Milwaukee with Tina.  I prayed that Ali’s performance would happen at a time I could sneak away.  I didn’t commit to Ali that I would be there, just in case.  In fact I told her that I probably wouldn’t be there, depending on the timing.

After driving through rush hour traffic Friday afternoon in downtown Milwaukee, I was beginning to think I was crazy to even think about traveling to Waukegan on my own the following day.  It was insane.  Some of the worst traffic I had ever been in!  But to make a long story shorter, God worked it all out for me.  Her performance was going to happen at a time I could go…actually the best time possible during the Retreat.  My GPS guided me perfectly, and there was much less traffic than there was the day before.  (Thank the Lord!)  I enjoyed the hour drive, and as I drove by some of the places our family visited two years ago on our vacation, I reminisced of special memories at those places.

I arrived a half-hour early.  Ali didn’t know I was going to be there.  That excited me the most…surprising her.  A group of other parents had also came.  As I sat in my seat, in the second row from the front, I could hardly wait for them to walk on the stage.  Their first two songs were performed excellently.  Then during the ballad, their third song, Ali spotted me.  I had never seen such a big smile come across her face as I saw in that moment.  I wish I could have frozen that moment in time.  Tears began welling up in my eyes.  I was so proud. 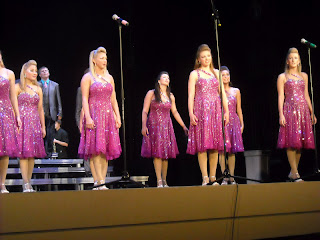 Moments of our fall season flashed through my mind…pictures in my memory of Ali in the hospital sick, of how very sick she was for so many days, of her car accident, of her working so hard to catch up in school. I thanked God for what I was experiencing as a mom at that very moment, and for how He healed and protected Ali through everything she went through so she could be up there performing and doing what she loves.  If I was that proud, I could only imagine how proud God must have been, and is, of her! 🙂 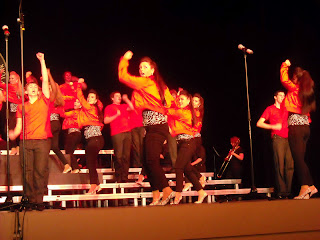 The ballad was beautiful, and they performed their final two songs wonderfully.  I knew they had done well!  The top three show choirs would advance to the National Championships.  There were, I believe, nine show choirs that were in the competition.  The hug I received from Ali afterwards was one of the biggest ever!  She was so happy I came, but I believe I was the one who benefited the most in being there.  It’s a memory I will hold in my mind for a very long time.  I’m so glad I went! 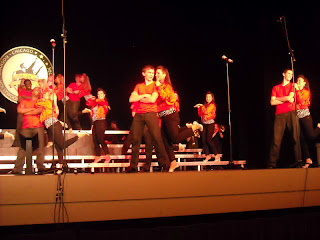 I traveled back up I-94 to Milwaukee.  Grabbed a latte on my way, and arrived back with plenty of time for the Retreat.  Ali texted me just after they found out the results… “NATIONAL CHAMPIONSHIPS HERE WE COME!!!!!!!!!”

Amazing…I was elated the rest of the night, and shared the great news with all the women in our group.  How exciting, especially for Ali and all of the Seniors!  They will travel to back to the Chicago area in April and perform in the National Championship.  Lord willing, I will make the trip again…I don’t want to miss it for anything!

To God be the glory…great things He has done!  Nice job, ladies & guys!