If I can be completely honest with you, I am wiped out today.

After returning home from our annual Super Bowl party last night, I was pooped! I found it frustrating that even though I went to bed before 11pm, my eyes were still wide open and they saw the numbers on my clock and hour and a half later that read 12:30. I also remember seeing 1:43 and 4:28. I know I slept at some point, but it was in no way a deep sleep.

My alarm went off at 6:30 this morning, and I felt like I hadn’t slept a wink.

I decided this morning I’m changing the time that I take my supplements and vitamins to earlier in the day to see if that will help. This isn’t the first time I’ve experienced night like this recently. The way I feel now though, I could fall asleep right here and now!

Changing subjects back to the Super Bowl…

I was sad to see the football season come to an end last night. Again, I found myself sitting next to Zach, watching the game with him (along with the rest of our family, my brother’s family, and Rich and Taylor). He and I had a fun season together on Sundays. I’m going to miss that. (I’ve written a few posts about our weekly shared football time.) Is it sad to say I’m looking forward to next year already??? 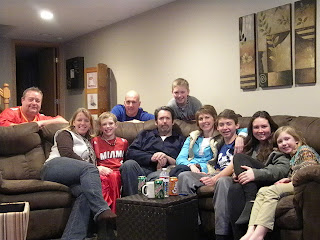 I really didn’t choose a favorite team to win. Since our beloved Colts wouldn’t be named World Champions this year, I was indifferent to whom the winner would be. I’ve been impressed in watching quarterback, Colin Kaepernick play and knowing he’s a Christian. I also like that he has Psalm 27:3 tattooed on his left arm. 🙂 I also have appreciated the Ravens and their offensive tackle, Michael Oher, since seeing The Blind Side movie back in 2010. And watching Ray Lewis play his last season before retirement has been interesting for me. I hear him give the glory to God in his interviews, and according to the Sports Illustrated, February 4 issue, Lewis wears a black t-shirt under his uniform that says PSALMS 91. I appreciate that too. (The article “In the Fields of The Lord” in that issue is an interesting read, by the way!)

So I was mixed. I wanted to see a good game, and in the end, I received just that! 🙂 At first, like probably many of us, I thought it was going to be a blowout. And maybe it would have been if the power outage wouldn’t have happened. The 49ers weren’t going to lay down and die after that. I can certainly respect a team for fighting back and not giving up. And both teams, I thought, fought until the end.

I didn’t care so much for the language I saw used by both coaches. If I would have been their mother, I would have been appalled. (And yes, Ali and Zach, I know you’re probably rolling your eyes right now. I’m okay with that!)

The half-time show? Call me old-fashioned, but the dancing moves and the costumes (or lack there of) of today don’t set very well with me. Enough said. 🙂

We enjoyed watching the commercials, like we do each year. The best in my opinion will be no surprise to those who know me…the Dodge Ram commercial about the American farmer. Loved it! My dad was a farmer, I married a farmer, my brother is a farmer, and most of Bill’s immediate family are farmers. I guess that’s where my roots are. (I might have to find that commercial and put it on my blog!) The 2nd best? The Budweiser Clydesdale commercial. (Please understand I’m not promoting drinking beer or Budweiser here, by any means.) My sister-in-law, Stacie, and I were anxiously awaiting the annual Clydesdale commercial and we weren’t disappointed. The message warmed my heart. Seeing the Budweiser Clydesdales in person in St. Louis have made them even more special to me. 🙂 The worst? In my opinion was the GoDaddy commercial. Sorry, GoDaddy, but I think you probably intended it to be that way. 2nd worst? Wonderful Pistachios. Didn’t care for it.

We also enjoyed the food feast we had last night! Oh my…way too much food and it was all great! (Ah ha! Maybe that’s why I didn’t sleep so well last night!) Ali’s incredible festive cupcakes were a hit too! 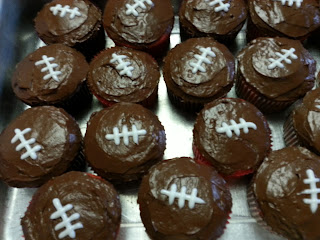 Pat and Stacie sure know how to throw a party! Great food, great atmosphere, great company and a great time! Thanks, VH Gorkows!

Another season and another Super Bowl in the books. I wonder if the Colts will make it to Super Bowl XLVIII? I guess we’ll wait and see!