What happens when you cross my friend Karen M. and her car, with a deer in a thunderstorm? 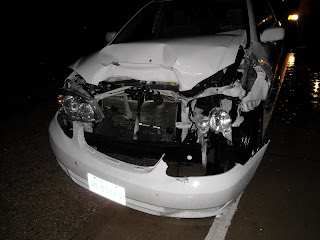 This is what Ali, Zach and I found when arriving on the scene. My good friend Karen M. called me as we were on our way home from Grace and Olivia’s birthday party around 8:30 tonight. Most of the evening at the party we were watching the weather on t.v. Tornados had touched down in other surrounding communities earlier in the evening, and we had been joking just a little about us making it home okay from the party. We were recalling scenes from the movie Twister, with cows and tractors flying through the air. We joked that if we saw any flying animals on the way home, we’d be calling each other. 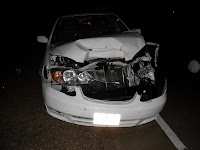 The kids and I were just a little nervous driving into the next approaching line of thunderstorms to get home, but I was bound and determined to get there and get the kids to bed at a decent time. With just a few miles left to go, my phone rang with Karen on the other end saying she needed help…she just hit a deer and her car was totalled. I seriously thought she was kidding at first, because of our “flying animal conversation” we had just a few minutes earlier! Once I realized she was not joking, I said we’d be there to rescue her as quickly as we could.

We cut across onto rural roads to get to her, through lightning, thunder and a whole lot of rain. When we arrived on the scene, I wasn’t prepared for what I saw. I’ve never seen damage to a car that bad that was hit by a deer. Neither had the police officer who came, nor the tow truck guy. And I couldn’t believe that Karen did not have even a scrape on her from the accident! From the looks of her car, I thought surely she would have been banged up, bruised, bloody or something! God completely protected her! I am so thankful to Him this evening! She was quite comical when she hopped into our car, she said something like, “I hit that deer so hard, his head came off!” Not that we need to think about that scene, but she was not the least bit shaken up either! She said the deer came out of the ditch and she had no chance to even brake.

After the tow truck left with her car, we got her to the local airport where she rented a car and she drove home. We did too, a little later than we planned, but I’m so grateful God protected Karen tonight, protected us in the thunderstorm, and allowed us to help our friend!