Four Hours in a Van with Five Kids! 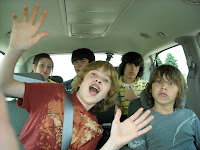 Yesterday I spent four hours of my day with five Lefebure kids and Bill in a van riding to and from our niece’s graduation party. I have to say, some great memories were made in those four hours!

Mike, my brother-in-law, and his wife, Noel, needed to stay back for their daughter’s dance recital. Mike was even dancing in it! 🙂 So he asked if we could take three of their sons with us, and drive their van to the graduation party. I thought it would be an experience, but I didn’t know it was going to be so fun!
Brandon is 17, Evan is 15, and Justin is 13. Add in our Ali who is 15, and Zach who is 12, and you can imagine what kind of ride it could have been! 🙂 But, I was amazed…it was pretty quiet going there…I slept for almost half of the trip! 🙂 Brandon, Ali and Evan were watching a movie on the laptop in back, and Zach and Justin were playing video games in the middle seats. These cousins get along SO well! They always do…what a gift that is for all of them! Growing up I wish I would have had cousins so close like they all are! 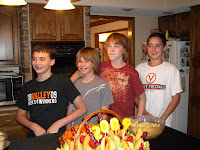 When we arrived, we piled out of the van, and it was quite a funny scene as we were walking down the sidewalk toward the graduation party. Zach and Justin were in front, Evan and Ali followed, and Brandon was behind them. Bill and I were bringing up the rear. I said to Bill, “I bet people think we have five kids!” Bill replied, “That’s the case with Mike and Noel!” We both laughed…he was right. They have five kids between the ages of 10-17! 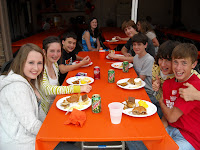 We had a great time at Bridget’s graduation party. I felt very old…Bridget was just born when I met Bill in 1991, and here we were at her graduation party! Ugh! She is such a beautiful girl, on the inside and out! Many more cousins were there, which made it even more fun for Ali and Zach!
The real fun was on the way home…Evan rode home with some other cousins, so it was just Zach and Justin in back, and Brandon and Ali in the middle seats. Brandon was telling us stories about some of his friends driving…which were hilarious! We took a picture of the moon…it was almost full, and the picture made it look like a UFO. Brandon sent it to his cousins in the other car asking if they saw the UFO. 🙂 Again…hilarious! We saw a huge speed trap and got through it ok, and we kept playing something almost like leap frog with another van (passing each other back and forth) for a very long stretch…not sure what they were doing in that van but their cruise control must not have worked…they wo 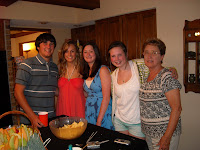 uld speed up and slow down for miles! Brandon and Ali were going crazy with this van! Brandon was ready to drag race and was encouraging Bill to do so…kiddingly! I know “you had to be there” to appreciate these stories…many laughs and great memories were made on the way home last night!
I thanked God for those four hours in a van with these great kids! Five cousins having fun together and allowing Bill and I to be a part of it…it was priceless to me!
◀Previous Post
Next Post▶