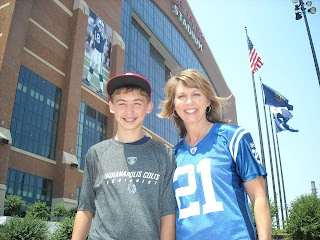 My love of football originated with my son. In my younger years I never could grasp what the big deal was about football. Maybe if I grew up near football, or if we had a football program at our high school, I would have taking a liking to it earlier. But it wasn’t until just a few years ago that I became a fan and follower.

When Zach began to show interest in football in his elementary years, he first began to follow the New England Patriots. That didn’t last too long and his favorite team soon became the Indianapolis Colts. It’s been that way ever since.

On our summer vacation in 2011, we spent a couple days in Indianapolis and toured Lucas Oil Stadium. It was a great experience for all of us, especially for Zach! Some day soon, we’ll make it to game! 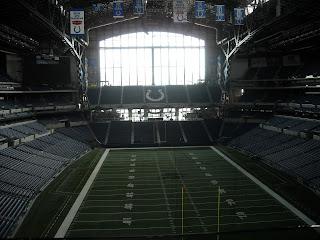 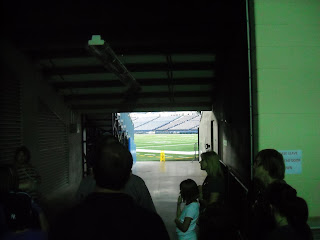 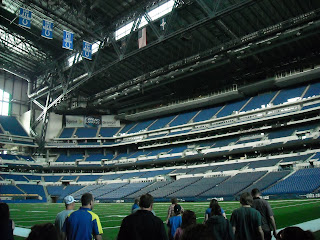 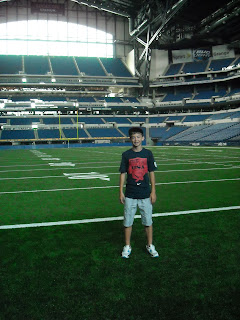 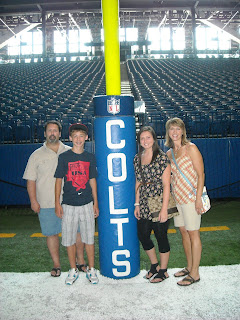 Hearing Zach talk about his team with much excitement, led me to get a little more interested. I would sit with him on Sundays and we would watch the games together. I remember the Sunday night we were sitting on the couch next to each other and watching a Steelers’ game. I didn’t know many of the players names, but I knew of the Steelers’ player who had the long, big, bushy, black hair. I couldn’t remember his name, and the only name that came to me left my mouth before I realized it, “Let’s go, Apollo!” Zach shook his head as he corrected me. “His name is Polamalu, Mom.” Oops!  🙂 Just to tease me, my family still calls him Apollo to this day.

I’m probably not one many would want to watch a game with. I don’t keep quiet during a game…no matter who’s playing. And when the Colts are playing, I cheer even more. I’ll not intentionally say stuff out loud like, “Get him!” “Come on!” “Keep going!” “Don’t stop!” “Yes!” “Whoo hoo!” My family is just used to it by now. 🙂

As we are watching the Colts take on the Ravens this afternoon, I heard about the letter Colts’ coach, Chuck Pagano wrote to the people of Indiana as he has returned to the sideline after a medical leave for leukemia treatment. I have much respect for this man. His letter was published on IndyStar.com.

To the people of Indiana:

When I accepted the job as head coach of the Indianapolis Colts last January, it was a dream come true for me and my family. I knew I was coming to an organization with a great owner and a great winning tradition. I knew Indy had great fans, but I might have underestimated just how great. Being new to the community I never expected the outpouring of support I received from Colts fans throughout the state and country. The love and support you showed my family and me gave me a tremendous amount of comfort and peace. Every letter, success story, prayer and act of kindness made this process a whole lot easier. I am also fortunate to have had some of the best doctors and nurses in the country right here in Indiana to care for me.

I am proud to serve as the head coach of your Colts. I take great pride in knowing that the team has persevered this season because you have shown them the same support you have shown my family and me. You have had a huge impact on my recovery and our season and I look forward to accomplishing great things here for a long, long time.
On behalf of the Pagano family, thank you for helping me heal and for showing our country that we do have the best fans in the entire world; fans whose love for their coaches and players extends way beyond the football field.

Football has been something special Zach and I have been able to share together over the years. No doubt, that’s what I have enjoyed, and continue to enjoy the most!

(Second-half is about to begin. Go Colts!)