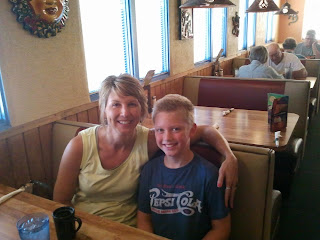 My Godson and nephew, Bennett, celebrated his 10th birthday on Tuesday.  My “birthday date” with him was last evening…what a very special time we had!
After leaving the Mission, I met up with Bennett and his family at Target, and off he and I went for a fun birthday night!  He chose to eat at Carlos O’Kelly’s.  (One of my favorites!)  We began our meal with a couple of bowls of chips and salsa, and one of his favorites–queso dip.  We each ordered three hard shell tacos…mine were 2 chicken/1 beef, and his were 2 beef/1 chicken.  I found out he likes hard shell tacos just as much as I do.  We ate until we were stuffed, which seemed to happen quickly…due to all the chips we ate beforehand!
I love Bennett.  We had some wonderful conversations as we sat together.  We talked about the sports he’s involved in, his favorite teams, the upcoming (hopeful) NFL season (we both like football too), school, his family’s upcoming vacation, the events of his day, and more than I can think of right now. 🙂  There was never a lull in our conversation!
Our next big decision was where we were going to get dessert…get a Cheesecake Empanada or go to Coldstone for ice cream.  Bennett finally chose Coldstone.  Bennett inquired how long it would take to get to Coldsone as we were en route.  (I couldn’t imagine eating another thing, but he couldn’t wait for ice cream!)  He ordered Sweet Cream ice cream with Kit Kat, and I ordered Mint ice cream with chocolate shavings.  By this time I was miserable.  I ate about 3/4 of my Like It cup and had to quit.  Bennett finished all of his. 🙂
Next decision was what to do after ice cream.  Bennett thought it would be fun to come to our house and play Xbox Kinect.  So, off we headed for our home.  No one was home when we arrived…which was even more special to me to have that alone time with Bennett playing video games. 🙂  We played Rallyball as a team and the pictures it took of us were hilarious!  We laughed, were out of breath often, and began to work up a sweat…keep in mind we were playing on very full stomachs!
Before long, Ali arrived home, then Zach and Bill.  We had to stop playing…we were getting too tired!
Bennett and I had such a fun evening together.  I appreciate Bennett’s heart and how he includes me in so much of his life.  I hope he felt special last evening…he sure made me feel special!  I feel like I have a special bond with him because he’s my Godson.  I consider that an honor and a privilege!  It’s hard for me to believe he’s already 10 years old!  I look forward to watching him grow up into a young man, and being a part of his life as he does.  It’ll be great to see the wonderful things God will do in his life in the years to come!
◀Previous Post
Next Post▶