Preparing for our last last BSF Leaders’ Meeting (which was yesterday), I was dumbfounded as I reflected on this BSF year (from September until now). God has been so faithful. He has taught me so much. He has grown me up and has confirmed His calling on my life.

I thought back to October and November when Ali was so sick with mono. How frustrating it was and how helpless I felt to not know what was wrong with her. Two weeks went by without a diagnosis. Two trips to the ER. She was so frail. She was so sick. How worried I was. Yet, God had her in His hands all along. I knew that, but it was hard seeing her that way. Friends encouraged me. Family stood by us. Many prayed, including my BSF sisters. I don’t know what I would have done without all of these dear people. My BSF lessons and reading God’s Word strengthened me and gave me much peace.

She slowly improved and after six weeks, she began to return to her normal self.

Then her car accident on that dreary Monday…December 5. My world was rocked. God was there. He took care of her when no one else was physically able to be there with her. He calmed her. He saved her. I’m so thankful. My BSF sisters were praying that morning, as I was away from them and in the ER with Ali. Many were praying for her that morning and throughout the day. Her car was totalled. She was alive. But I haven’t been the same since…still every time she leaves the house, my heart panics just a little. My trust in Him has grown immensely.

Last week I drove passed a cross along the side of a road, not far from where Ali was in her accident. I remembered the girl that was killed there years ago on her way to school…the same school Ali goes to, and she was about Ali’s age. She hit a tree, and was pronounced dead at the scene. Ali and another car collided. God spared her life. I ached for the family who never saw their daughter again after that morning, and at the same time, was thankful for God sparing Ali’s life that morning. I know in my heart He has big plans for her. I can’t wait to see them unfold.

In reflecting on this BSF year, I also was reminded how I was questioning my calling at Mission of Hope about mid-February. I was searching, and thinking that maybe God was moving me out of the Mission. I was wrong. His call was confirmed when I attended this year’s BSF Leaders’ Retreat in Milwaukee. It was a much needed weekend with Him! There’s no better place than being in the center of God’s will!

Throughout each BSF lesson, I was encouraged, convicted, humbled, grateful, blessed and thankful. I’ve learned so much these 32 weeks. As our year comes to an official close tomorrow, I’ll be looking back over my lessons to soak everything in one more time. I plan to then find a study I can do over the summer to keep me in God’s Word.

BSF is such a part of my life…so thankful for it today!

END_OF_DOCUMENT_TOKEN_TO_BE_REPLACED 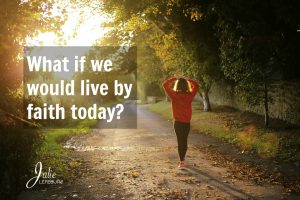 What If We Would Live By Faith Today?