One of the greatest gifts I have received in the last couple of weeks has been from my friend Patty.  She found this picture of my dad’s mechanic garage in a photo album.  I’m grateful she made a copy for me and also sent it to me electronically.  I don’t have a picture in any of my files of Dad’s garage, and I don’t believe my brothers did either…so this is quite the gift for all of us!  I passed the picture on to my brothers as well.  My brother Pat couldn’t believe it! 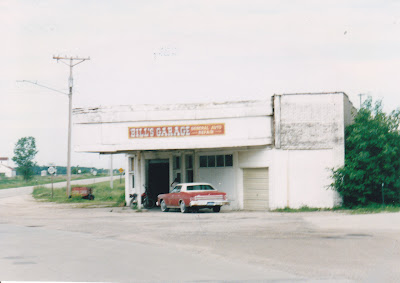 I have many great childhood memories in Dad’s garage.  I can remember King, Dad’s white German Shepherd, who was “guard dog.”  I always thought it was cool that when you held your hand out to him, King would put his paw in yours and would “shake” your hand. 🙂  I can remember one time when I was down visiting Dad and while he was working on some engine, something sort of “blew up” and the arm of his coveralls caught on fire!  I have vivid pictures of his arm on fire in my mind still to this day!  That was pretty scary for me being so young.

Dad was such a hard worker, and from what I understand, he never charged much for the work he did.  He could fix anything…from cars, to tractors, to farm equipment, to school buses.  He did it all…and without computers!  He was also in charge of keeping the school buses going each year for our school district!  But as he grew older, and the work became harder for him, and as transportation became more advanced, he retired from his work in 1994.  Patty said this picture was taken in July 1994, which is around the same time Dad was ending his work there.

The car out front was our LTD.  I remember driving it to work every day when I still lived at home as a young adult.  I’m grateful to have a picture of that car too!

This is a picture I will cherish forever.  What’s that saying…”A picture is worth a thousand words?!” This one IS! 🙂  I am so thankful that Patty found this picture, and I’m very blessed that she passed it on to me!  I think Dad would be so proud to see it today.  I know I sure am!