Baby Think It Over 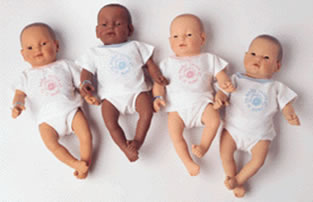 One evening at the beginning of this month, Zach brought home a piece of paper from school for Living Skills class, and on this paper, we as a family needed to pick out a date where Zach could bring home “Baby Think It Over.”  We decided Wednesday, the 18th would be a good evening as we didn’t have anything planned that night and Zach wouldn’t need to get up early for soccer practice, etc.  We sent the paper back with Zach to school the next day…and the thought of this baby left our minds.

That was until yesterday morning.  Zach came in my room and asked, “Mom, who’s picking me up after school today?”  I told him I would be, then we would go back to the Mission like we usually do on Wednesdays.  He then said, “I’m bringing the baby home tonight.”  My thoughts were, “Oh, that’s right.  How did I forget this?  What is this going to be like?” Silently I prayed, “Lord, help this go well!”

After school I drove up in front of his school building and walking toward me was Zach, carrying a baby carrier.  He had a small smirk on his face…either of embarrassment or a little excitement.  I walked him through how to buckle the baby carrier in the back seat and off we went!  The baby wouldn’t “turn on” until 5pm, so we had some time before his caretaking began.  We spent time at the Mission until 4:30, and wanted to make sure we would arrive home before the baby would “turn on.”

About five miles from home, we heard a noise from the back seat.  Zach looked at me, and I looked at Zach…both of us with expressions of being unsure what would happen next.  We made it home, but almost as soon as we walked in the door, the baby started crying.  Reading the instruction sheet and trying to figure out what Zach needed to do first was just a little stressful.  Zach went from rocking, to feeding, to changing diaper, to burping in random order…and more than once in 45 minutes.  At one point the tears began to appear in Zach’s eyes and he said in almost a yell, “I wish I would have done the paper!”  (He could have written a paper instead of bringing the baby home.)  With a little encouragement, and hearing a few stories of when he was a baby, the emotions subsided and he made it through what would end up being the roughest time of the evening.

Off and on through the evening the baby would cry, and Zach would pick her up gently and try feeding, or rocking, or burping or changing her diaper.  He did well.  Bedtime came quickly, and Zach decided to sleep downstairs on the couch so the baby could be near him.  From 10:30 till after 11:00, the baby cried three times and needed care.  I began to think this was going to be a long night.  Zach said each time he was just about to drift off to sleep, then the baby would start crying.  I was still awake upstairs, so I would venture downstairs each time to sit with him in support.  He put the baby back in the carrier, and we both went to bed.  He didn’t hear anything from her until 5:30 this morning.  He fed her, burped her, changed her diaper and by that time, it was time for him to get up and get going for the day.

The baby turned off at 7:30.  We both sighed a sigh of relief when the time came as we were on the way to school.  Zach did very well through this experience!  I am so proud of him!  I feel he was really able to get a taste of what being a dad would be like…especially on his young age..  I don’t believe he’ll want to go there again anytime soon!

He didn’t even want me to take a picture of her or him taking care of her. 🙁  I respected his wishes.  I think we’re all glad last night is over, and that it was a relatively good experience!