Our cousin, Tom from Columbus, OH sent this to us on Sunday, and I just had to share it here!
If you’ve read any of my posts for a period of time, you probably already know how important and special “family” is to me…my family–both immediate and extended–are priceless to me and I cherish the times I spend with each one.
Well, when I married Bill and into his family, I was blessed to have an even more extended family…unlike any other family I’ve seen.  Beautiful people on the inside and out who value family as much as I do.  Our “Columbus cousins” are a part of that special group of family (Tom and his mother, Elois, are some of our “Columbus cousins”)!﻿
Thanks to our son, Zach, we are Colts fans.  We were saddened that they didn’t make the Superbowl this year…but there’s always next year, right Zach?  So, after I read this from Tom on Sunday (below), part of me was cheering for the Packers, and part of me was still cheering for the Steelers (to support my Godson, Bennett and his team). Either way, it was going to be a good ending. 🙂
Thank you, Tom, for sharing this with us!!  We love you!
“Okay sports fans how well do you know Vince Lombardi? 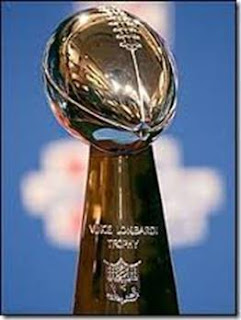 You know he is the guy that the Super Bowl Trophy is named after. 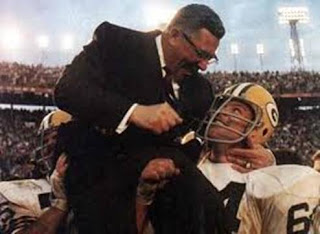 You may also know that he is the coach that won the first two Super Bowls with the Green Bay Packers. 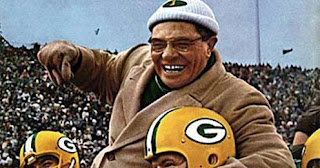 You may even know that he won three more NFL titles prior to the inaugural Super Bowl I.
He accomplished all this after taking the head coaching job for the lowly Green Bay Packers who finished last in the league at 1-10-1 in 1958 the year before he arrived.
The first of many famous quotes to his new team in 1959?
“I have never been on a losing team, gentlemen, and I do not intend to start now!”
Who knows maybe you guys know all this already …

But did you know that he used to be a teacher and coach for eight years at a catholic high school?

Vince also had a brother Joe there who it is said that he was very hard on, expecting more from Joe than any other player.

Strict and a devout catholic Coach Lombardi made sure his players knew what to do with “The few minutes that count before the game!”

Yes guys these were the days with natural grass fields where the game was played without face masks.

About now you are probably wondering where I came across these year books from a catholic high school in New Jersey.

Well you see Mr. Lombardi used to be my Mom’s chemistry teacher while she
was a student at St. Cecilia HS. 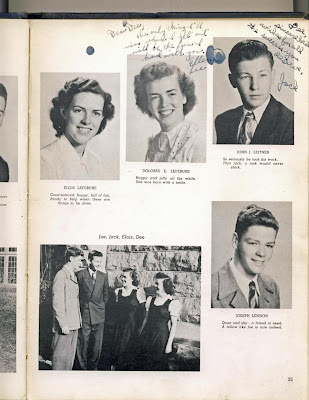 Elois Lefebure Cua and her sister Dolores Lefebure Devery are pictured above and
below in this treasured old year book.
I do not have the year books that would also picture her brother Henry Lefebure or her sister
Virginia Lefebure Schutz.
All [were] children of Regis and Margaret Mary Mulherin Lefebure.
For these reasons, and the fact that once again the Cleveland Browns have yet to advance to a Super Bowl again this year, we will be rooting for Grandma’s team in today’s 45th edition of the Super Bowl!
I think even our Pittsburgh born Cua cousins would give us a one day pass where Grandma Elois is concerned.
What do you say Pat & Heather?
Okay gentlemen, enough is enough, feel like getting motivated?
Click on the following link and read a few of Coach Lombardi’s famous quotes:
http://www.vincelombardi.com/quotes.html
After reading a few of those, you will be looking for your old helmet … face mask or not!
Tom”
◀Previous Post
Next Post▶