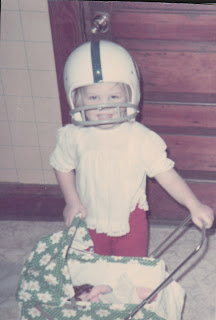 I’m guessing I’m around three years old in this picture. I have my brother’s Baltimore Colts (before the Colts were in Indianapolis) football helmet on, playing with my baby in her stroller.
Little did I know at three years old that I would have a son someday who would be a big Colts fan!  And unless one has been in a cave all football season, or doesn’t follow football at all, we all know that the Colts are playing in the Superbowl today!  How fun it was for me to find this picture of me this week…I just HAD to share it! 🙂
Zach started pulling his Colts’ memorabilia out of his room last night to decorate our home for today…a Colts pennant, his Colts trash can, a picture of Bob Sanders catching a pass, etc.  He’s pretty excited for today.  I think he might have even become a little more excited to find out that I would be spending the day with him, and would be home for sure to watch the game with him later today.  Bill is going with Ali today to her volleyball tournament…it’ll be weird for me not to be at her games, but I think Bill is wanting some dad/daughter time. 🙂
I become quite animated during football games sometimes, and I think Zach enjoys watching me and listening to me.  His reactions are usually shaking his head at me, laughing at my behavior, or joining in with me.  This started last year as we were at home, Zach and I, sitting on the couch together watching the Steelers play, possibly the playoff game.  Troy Polamalu was running with the ball downfield, and I couldn’t remember his name.  I began yelling “Go Apollo, go!”  Again, he laughed and shook his head. 🙂  I act as if almost my son was out there on the field…never wanting anyone to get hurt.
We are turning the game into a party…since we are staying home for it, we invited Tina and her family over.  I’m looking forward to this…enjoying some downtime, spending time with Tina and her family, and cheering on the Colts, of course!  We’ll have lots of good food…some good for you, and some not…and I’m sure, we’ll have lots of laughs!
Go Colts!  I’d love for Zach’s team to win today!
◀Previous Post
Next Post▶