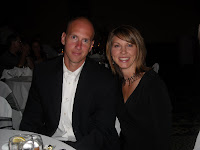 After my mom passed away in December 2006, my brothers and I had a daunting task of going through Mom and Dad’s possessions in the house we grew up in.  Before we began that task, it was something I completely dreaded.  But the first time we met, I soon found out that these evenings of pulling stuff out of the cupboards, going through closets and drawers, going through the house room by room were going to be some of the most precious times I had with my three brothers.  We would sometimes have food, sometimes have drink, but we would always have coffee…made from Mom’s coffee pot (there was nothing like the coffee from Mom’s pot).
We started to call these evenings NKA/NSA Nights…No Kids Allowed/No Spouses Allowed.  That may sound a little mean and cruel, but it really wasn’t.  It was more of a joke or a fun way to term these nights we would get together.  I loved them and looked forward to them.  Before each time together was through, we would end up lauging more than anything…recalling old times, from something someone said, finding something from our childhood, etc.  I hated to see those times end…but they did.
We tried to resurrect the NKA/NSA Nights a couple of times since then…but only a couple of times.  In January, I was reminded we needed to do that again, as it had been almost a year and a half since we had one of our special nights together.  So, we set a NKA/NSA Night for last night, and only my brother Pat attended it with me.
We met at a local restaurant that we as a family used to eat at when we were growing up.  We had so much fun, and we talked about so much.  We recalled old times, laughed about Pat shaving stripes in his hair before a basketball game back in high school, talked about being parents and raising our children, talked about business and how our focuses have changed over the years regarding our businesses, talked about the future, the past and the present.  It was wonderful1  We only met for a couple of hours, but those hours were priceless to me!

I hope the next one we have everyone will be able to come.  My three brothers are very special to me, and I want to keep us close in our relationships with each other.  I will do all I can to help that happen.  I know how life can get so busy, but I realize if we don’t take the time to keep our relationships strong by spending time with each other, life can just take over, and the people most important to us take a back seat to the “busyness” in our lives.  I certainly don’t want that to happen with my brothers and I!

What a wonderful evening out it was last night!  Like I mentioned, it was priceless to me!  🙂