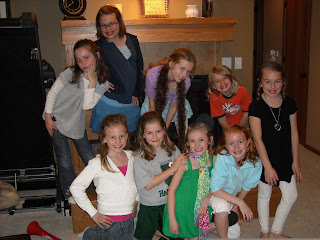 Last night Ali and I had the privilege of helping Grace (Tina’s daughter) with her 9th birthday party at their home! It was a Marvelous Makeover Birthday Bash!
And it certainly was MARVELOUS!
Nine girls, eight who are nine years old and one who is seven, received makeovers f 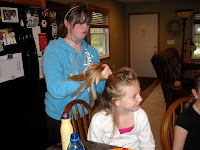 rom Ali and I! Ali was in charge of hair and I was in charge of makeup. These ten girls were so adorable!
We did makeup first…mineral powder, shimmery eye shadows, shimmery pink blush, and of course lip gloss to complete their looks! Then on to hair…Ali curled, straightened, pinned, put up, tied, etc. these ten girls’ locks…most of them had long hair. Ali is amazing when it comes to doing people’s hair! I assisted to make things go a little quicker. I’d have to say these girls looked older than nine when we were finished! 🙂
The girls did a quick fashion show, and a group dance, modeling their “new looks.” Tina, Ali and I were the judges. It was so fun! 🙂 Tina is quite the hostess…she had pizza, brownies, and wonderful M 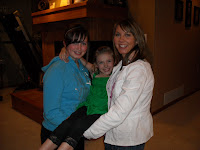 ay Day party favors for each girl.
Before we knew it, the two hours were up and the party was over. We had such a great time, and I think the girls did too! It really blessed me that Grace asked us to come and help with her party! What a privilege it is for me to be able to be a part of her life like I am! Grace will officially turn nine tomorrow…she is such a joy to everyone who knows her…especially to ME!
◀Previous Post
Next Post▶