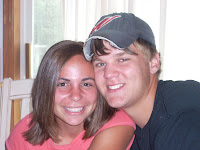 My nephew Matt (I call him Matty), who’s 16, had surgery on his left index finger on Wednesday. Late afternoon on Saturday he had gotten it caught in a pulley at work. In the emergency room that day, he was told by the doctor that he was lucky to still have his finger, and if his finger would have been in the pulley for a second longer, he probably would have lost it completely. Instead it broke at the last joint, near the end of his finger.

I wanted to be there before Matt’s surgery which was scheduled for 1pm. After Bible study that morning, and after a great lunch with Tina, I headed over to the Surgery Center around 12:30. It seemed like one delay after another, and the surgeon had an emergency surgery at one of the local hospitals, so Matt wasn’t taken in to surgery until 2:50. The small prep room was a little crowded with five of us in it…I’m surprised they let us all stay there, but I’m glad they did!
Lying there waiting, as you can imagine, Matt was hungry. He hadn’t been able to eat or drink anything after midnight. He said he couldn’t wait to have three McChickens after his surgery! 🙂 Everyone else was getting hungry too…everyone but me because I just had lunch with Tina. I ran with my brother Steve and nephew Adam to Wendy’s for them to go through the drive-thru and take their lunch back. Steve, Kelly and Adam ate in the waiting room while I hung out with Matt back in the prep room.
Matt just wanted to get the surgery over. He was patient, but I could tell a little nervous…I would have been the same way! Finally, the anesthesiologist came, gave him some anesthetic to begin the process, and off he went to surgery.
I couldn’t stay past 3:20, so I wasn’t able to see Matt after surgery. After talking with Kelly, my sister-in-law afterwards, they put in three pins…one through the end of his finger to past his second joint, and two smaller ones to connect the bones back together. The bigger one will need to come out in six weeks, and the smaller ones will need to come out in twelve weeks in another surgery. Healing will take some time, but thankfully he still has his finger!
The surgery delay was frustrating for everyone, but the staff at the Surgery Center did something very kind. While we were waiting during Matt’s surgery, the head nurse, who I knew through Mary Kay, brought out a gift card in an envelope to Steve and Kelly to help apologize for the long delay. The delays weren’t their fault, but yet they took responsibility for it and apologized in a very kind way. That impressed me! That was not something they HAD to do, but CHOSE to do. What great customer service!
Matt was home from school yesterday and will be home today. His prom is tomorrow night, so hopefully he’ll be able to still go to that with his girlfriend, Amber. My dad had a saying he would continually say to us if we were hurting or injured, and I’m sure if he was here today he’d tell Matt the same thing…”You gotta be tough!” Matt is a pretty tough kid…I think he takes after his dad and his grandpa! 🙂
◀Previous Post
Next Post▶