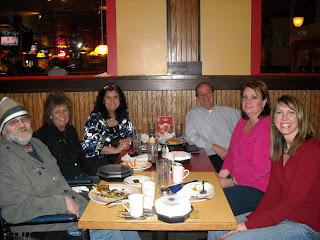 Last evening Pastor Barb, three friends from Mission of Hope and I took our friend Steve out to dinner. He was able to leave the hospital for a few hours! We went to Old Chicago…a restaurant I had never been to before…but I will be going back! 🙂 Their Spinach Artichoke Calzone was incredible!

Steve seemed to be having a tough day. He was moved to a different floor in the hospital, so that was an adjustment for him. He thought we were coming at 3pm instead of 6pm, so he was thinking we had forgot about him! 🙁 He sure smiled when he saw us at the door of his hospital room! We helped Steve into a wheelchair, loaded him in the Mission of Hope van, and off to dinner we went!
Steve ordered an individual sized pizza, and it was good to see him eat but all one slice of it. We both had our coffee (he’s my coffee drinking buddy), and he had a couple cigarettes outside while we were there. After he got back from one of his smoke breaks, he began to have a seizure. He stayed in control during his seizure which lasted almost 10 minutes. I felt so bad for him, and wanted to do something to help him. That was such a helpless feeling! After it passed, Steve seemed more like himself than even before the seizure. He was laughing, poking fun and really enjoying himself!
We got him back to the hospital around 8:45 and got him settled. Tami, one of the ladies who joined us, brough him a cd from a worship group that performs at the Mission once a month, who Steve likes very much. Tami loaded the cd into Steve’s player, and you should have seen Steve’s face light up when the music started! How the little things really matter to Steve these days, and what a reminder to me to pay attention to the little joys of life!
As we were leaving his room, we hugged him, told him we’ll see him soon, and Steve’s response was as normal… “Thank you for being my friend!”
◀Previous Post
Next Post▶

END_OF_DOCUMENT_TOKEN_TO_BE_REPLACED

"Thank you for being my friend!"