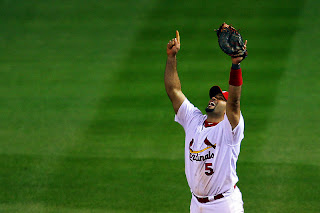 Unless you’re living on a remote island, you probably have heard the St. Louis Cardinals won the World Series in game 7 last night in St. Louis.

What a series it was!  Each game, our family was in front of our television cheering the Cardinals on.  The hoots and hollers from our living room could probably have been heard by our distant neighbors, especially during game 6 and last night’s game! 🙂  How exciting it was watching it all unfold in front of our very eyes!

Ali and Zach influenced our family in becoming Cardinal fans a few years ago.  Before that, I really didn’t have a favorite team, and really didn’t care to watch it much.  I have seen the Cubs play in Wrigley Field abd the Cincinnati Reds play in their stadium, which I don’t know the name of right now.  But for the last few years, Bill and I have given Ali and Zach for Christmas a weekend in St. Louis to watch their favorite team play.  Through these games and weekends in St. Louis, I have come to enjoy watching the Cardinals, to even becoming a fan!

Touring Busch Stadium with by brother Pat and his family two years ago during our Thanksgiving trip, and attending games we have, made last night’s win even more personal.  So much of what we saw on t.v. regarding the stadium and the environment, we experienced in being there beforehand.  Of course though, I can’t even imagine being there for game 6 or 7 in person!  A friend of ours attended game 2 of the series there, and our cousins were there for game 6!  Pretty incredible! 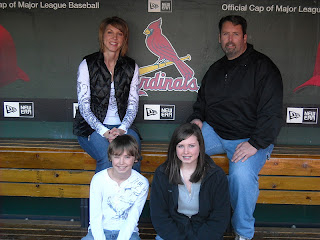 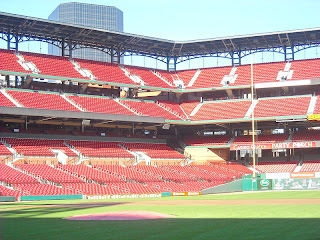 (Looking out from Cardinals’ dugout) 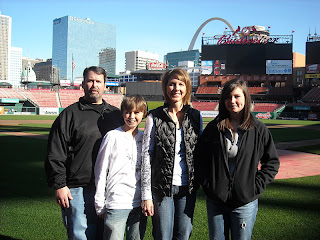 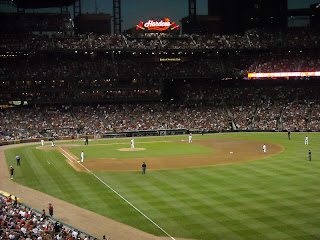 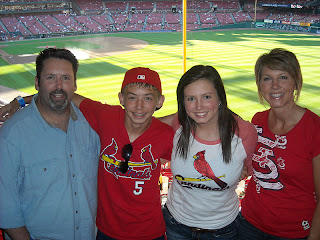 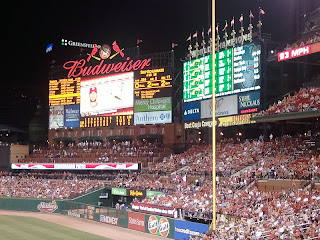 The first picture above caught my eye this morning.  I will always gravitate to images of people giving God the glory in anything.  That’s just who I am and where I am at in my relationship with God.  Albert Pujols did just that last night, and someone caught it on film.

Great job, Cardinals.  Your fans in small-town Iowa are proud!