My oldest nephew, Matt, celebrated his 19th birthday a couple of weeks ago…it’s hard for me to believe that he could be 19!  In the family pictures taken at our wedding back in 1992, he was just a few weeks old. Since he was little, I’ve called him Matty.  🙂

Last night I took him out for dinner for his birthday.  He chose Buffalo Wild Wings…a place I’m pretty familiar with since Ali works there!  We had a very enjoyable dinner!  I can’t remember the last time I had a one-on-one conversation with Matt.  What a great young man he is!  I was (and still am) impressed with his attitude on life, on work, and on responsibility.  He’s not out doing some of the things other kids his age are doing these days.  I actually reminds me a lot of his dad and my brother, Steve.  And one thing I really noticed is how polite he was…to me, to our server, to everyone he came in contact with.  I’ve always known Matt is pretty special…last night confirmed it for me again. 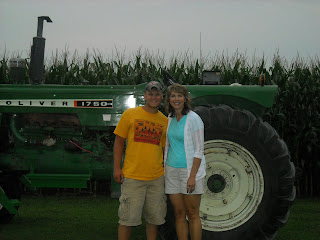 We are pretty blessed to have his family as neighbors.  As I was driving home last night, I realized I didn’t get a picture of Matt and I together.  Since he was driving home, and I was heading the same direction, we met at his home for our picture.  Kelly took it in front of Matt’s tractor…priceless to me!  I stayed and visited for another hour and a half!  It was a wonderful time with Matt, Steve, Kelly & Adam (and the cats)!  I look forward to the text time!