Our family loves music. It’s not uncommon to have music playing in our home throughout the times we are hanging out here. Ali and Zach listen to pop the most. Bill listens to the classics and rock often, especially when working out. I generally listen to Christian and country. But there always seems to be a mix of it all around our home…especially now since most of us have our choices of music on ipods or our phones.

So, when the Blake Shelton concert in this area was announced this past winter, we purchased four tickets for our family. We thought it would be something fun for our family to do this summer. Most people know Blake Shelton is a country singer. I especially enjoy his song, “God Gave Me You.” It reminds me of God’s provision of my husband in my life. 🙂
The concert was last night. Our tickets were on the “track,” which was right in front of the stage…standing room only. It was warm out, but not unbearable. (The ice cream cones we had ahead of time helped.) We went down to the track an hour or so before the concert started. I’m sure Ali and Zach would have much rather been hanging out with friends, than hanging out with Mom and Dad. But they didn’t complain. 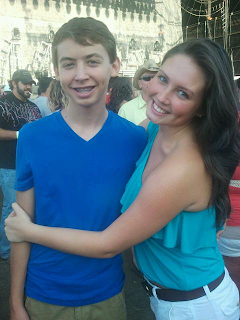 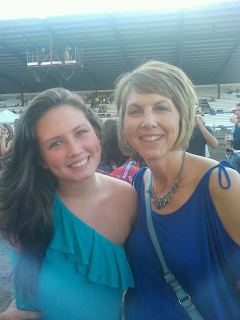 As the track began to fill up, I began to feel more and more old. Younger people than Bill and I, with two and three glasses of beer in their hands, spilling all over the place. Here we were with our lemonades and bottles of water. 🙂 Some of the young women were wearing clothing barely covering themselves, yet donning cowboy boots. The sight was interesting. 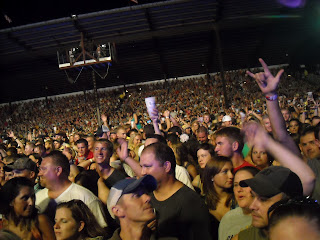 We’ve gone to other country concerts before, usually at least once a year, but this was something I’ve never seen before, and I’m not sure I want to again any time soon. The people around us were getting more and more intoxicated as the evening went on. More beer was spilled. Girls were falling all over guys. The language coming from others’ mouths was appalling. I was about to lose my cool, and I felt my Christian witness was about to go out the window. The final straw was when the girl behind me, who was so close to me most of the evening, spilled beer down my arms and back. I kept my composure, turned around and said to her in my “mom voice”, “You just spilled beer down my back! Please stop!” Thankfully she moved away from me. 🙂
Josh Thompson opened up for Blake. He was enjoyable to listen to. I’ve heard a few songs of his on the country radio station. He involved the crowd and really was a performer. I was impressed! 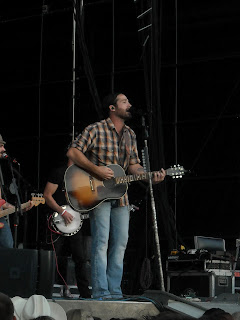 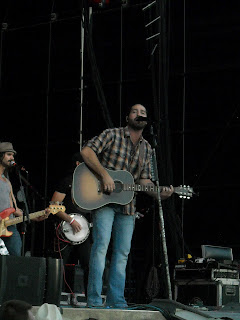 When Blake came out, I didn’t expect what I saw. I’m certainly not trying to bash Blake or his concert or his ability to perform. That’s not my intent here. He’s obviously a successful musician and is very talented. And very popular, at that. But when he came out on the stage, he looked exhausted. He looked like he had the worst day of his life. You know when you can tell that someone isn’t just quite right?? That’s what I saw. And I found it interesting when Bill leaned over to me and said, “He looks tired. He looks like he just punched into work.” 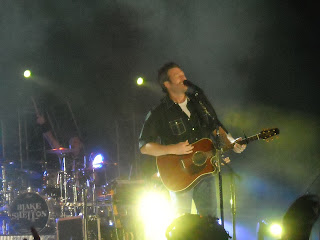 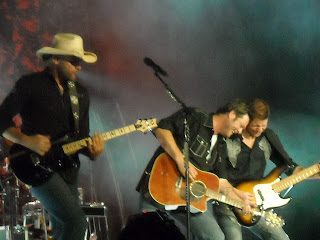 I can’t imagine living life on the road like he must. Living a life of fame and fortune, where you perform on a different stage every night. And you try to make the audience feel like they are the best audience you’ve ever performed for. And trying to personalize the concert for where you are performing. I would imagine it gets lonely and empty-feeling many times on the road. Maybe that’s the word I’m looking for…he looked empty. 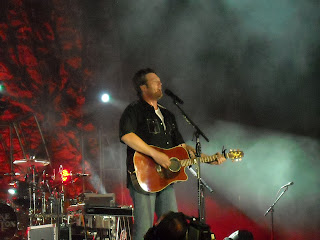 But he sang his heart out. He tried to connect with the audience, and the young people responded. I was completely turned off however, when during his song Some Beach, he paused in the middle of the song (this was obviously rehearsed) and threw about a bunch of obscenities including the “F-word” many times. Really? That wasn’t at all necessary in my opinion, but the rest of the crowd went crazy. Both Ali and Zach looked at me. I mouthed to them and Bill, “I’m ready to leave.” But we stayed. 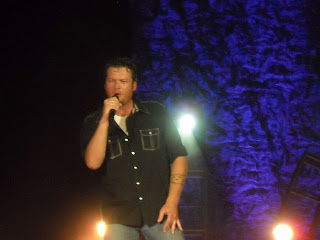 We stayed until the end. He sang Footloose and God Gave Me You for his encore. Amazing fireworks topped off the concert at the end. As I shared on facebook last night on our way home, I’d have to say, the highlight of my evening was when a few girls ahead of us climbed on boys’ shoulders. I said to Ali, “Here, hold my water bottle. I’m going to get on Dad’s shoulders.” You should have seen the looks on Ali’s and Zach’s faces! They were hilarious and priceless! (I didn’t climb up, even though a part of me seriously considered it…just to embarrass them.)  🙂
We all saw the good, the bad and the ugly at this concert. I pray Ali and Zach never, ever act like some of those young adults did last night. I’m sure some of my friends who are Christians think we as Christians shouldn’t go to a concert like that. Some probably think we shouldn’t subject our kids to an experience like that. But I believe we can go to a venue like that and be an example. I believe Bill and I were an example of a couple having fun, enjoying each other’s company, without having to have alcohol involved. I believe Ali and Zach saw how “uncool” it was for those who were extremely intoxicated. And I believe God can still bless our family with wonderful memories together in such a place…and He did. What’s that scripture again…We are to be in the world, but not of the world? 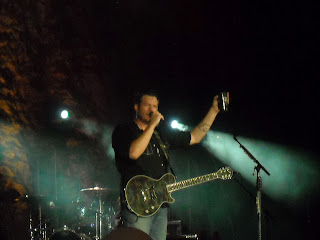 But we will probably think twice about the next concert we go to. I do have to say the MercyMe concert we attended last week was much better in my opinion. And I do hope Blake is getting some rest today!
◀Previous Post
Next Post▶